Newgrange: Monument to Immortality available in the bookshops


I am glad to report that my new book, Newgrange: Monument to Immortality, has arrived in Ireland and should be available in the bookshops this week. 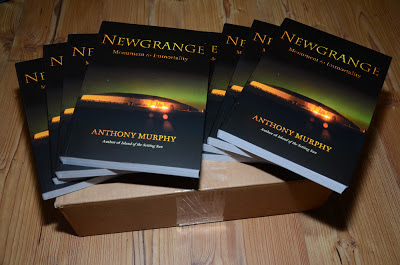 The books arrived from the printer the other day and will now filter out to all the shops from the distributor. If you are unable to locate a copy in your local bookshop, please let me know by email at mythicalireland@gmail.com. Alternatively, the book can be ordered directly from the publisher, The Liffey Press, from their website or by phone at 00353 (0)1 8511458.

The book will retail at €24.95 and contains 127 colour images, the majority of which were taken by me. If you enjoyed Island of the Setting Sun: In Search of Ireland's Ancient Astronomers, you will definitely enjoy Newgrange. However, my latest book is a more personal, philosophical and reflective look at our ancient heritage, and in particular what message it might have for us today, in these difficult and unprecedented times.

Posted by Dronehenge at 06:53 No comments:

I am delighted to report that I have just received the first copy of 'Newgrange: Monument to Immortality' from The Liffey Press. I received a call this morning to say the first two copies had been received at the publisher's office in Raheny, Dublin, from the printer. (The rest will follow next week).

It is a long-standing tradition, although not widely upheld today apparently, that the author receives the first copy of his or her work. Thankfully, The Liffey Press publisher David Givens still believes in this old mantra! And so, just after midday, myself and my wife Ann were on the M1 motorway heading for Dublin. I have to say that I felt like a child waiting to see what Santa had left . . . I couldn't wait.

The book is beautifully printed and finished, and feels quite weighty in the hand. I am thrilled that so many colour photographs have been used in the book. It is a top quality production - and I wouldn't expect anything less after the tremendous job that was done with 'Island of the Setting Sun'.

The book should be available in the bookshops by the end of the month, and the first official launch will take place in The Barbican, Drogheda, on Friday, November 9th.

Posted by Dronehenge at 07:21 No comments:

Some recent pictures from Mythical Ireland

Posted by Dronehenge at 04:59 No comments:


Mr. Brian Hayes, TD, Minister of State at the Department of Public Expenditure and Reform with special responsibility for the Office of Public Works (OPW) today announced that the OPW will be running a new Art Competition for primary school children aged 10 and over, with the winning entrants being present for the Winter Solstice in the Newgrange Chamber on December 21st 2012.

Speaking at Newgrange National Monument this morning the Minister said: “I am delighted to announce this new initiative, which will provide a wonderful opportunity for six lucky children, along with a parent/guardian, to enter the chamber at Newgrange on this very special morning.

“I think this new competition is a unique opportunity for children to learn about our heritage and affords the privilege of attending the Solstice to a wide range of people – schoolchildren and lottery draw winners alike.” the Minister said.

In addition to announcing the new children’s art competition, the Minister was at the Brú na Bóinne Visitor Centre to preside over the annual lottery draw to select the names of the people who will be allowed access to the Newgrange chamber over the winter solstice period. This year, the OPW received almost 30,000 applications, from destinations all around the world, proof of the enduring popularity of this amazing annual cultural showpiece.

The 50 winning tickets were again chosen by children from three local national schools, Donore NS, Slane NS and Knockcommon NS and hailed from locations such as The United States, The Philippines, France, Germany, Belgium, The Netherlands, Sweden, Italy, England and many Counties throughout Ireland. The winning applicants will have access to the chamber on one of the days between 18 and 23 December. On these dates, light from the rising sun enters the Newgrange chamber and illuminates the ancient passage tomb.

The winter solstice, the shortest day of the year, also marks the changing of the seasons, when days become longer and nights become shorter. It was considered by the ancients as a time of growth, a time of rebirth and, to this day, marks an important day in our calendar.
Posted by Dronehenge at 09:55 No comments: