Stunning skies over Dowth this evening . . .

Given that the mythology of Dowth is all about an eclipse which plunges the land into darkness, and that the name of Dowth - Dubhadh - means 'darkness', one might wonder why mankind ever grew afraid of the dark when the sky gives such glorious displays as this one. I spent around three hours this evening at Dowth, a place I deeply love. Unlike Newgrange and Knowth, it has not been excavated or reconstructed in modern times, and the tourists/visitors are few and far between, especially in the winter.

I was hoping to get a photo from the top of Dowth looking at the sunset towards Newgrange. However, the sky was almost completely overcast when the sun went down. However, as night came in the clouds started to break up quite nicely, allowing the stars to shine through. I got busy finding a location where the sky would form a dramatic backdrop to the mound.

What I particularly love about this shot, and some of the others that I took, is that the clouds seem to mimic the profile of the mound and trees. The orange colour of the clouds is light pollution from the town of Navan, some 10 or 12 miles to the west. They gave a dramatic contrast to the deep blue of the sky's afterglow.

The shot below was taken five minutes later. The sky was darker, but the clouds were brighter! Light pollution is becoming a major problem in Ireland. 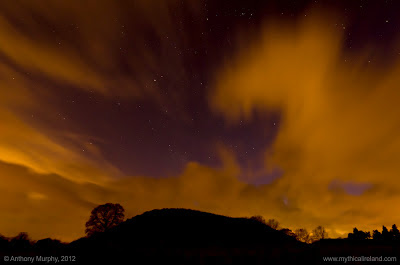