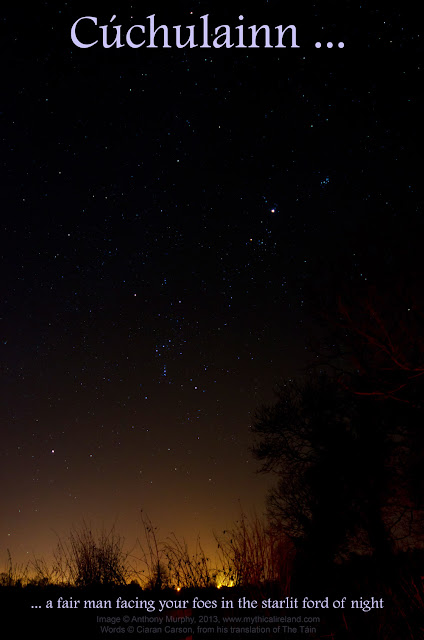 Cúchulainn, the mythical hero of the Táin Bó Cuailnge epic, has many attributes that place him among the stars, specifically as the constellation we know today as Orion. In Ciaran Carson's translation of The Táin, we read that Cúchulainn guards the "starlit ford of night", the ford being the crossing point of the Milky Way, located just above Orion, where the sun, moon and planets wander across the heavenly river.

I was out in the valley tonight, with my two daughters, star gazing and taking photographs and, as usual, getting inspiration. There was fog in the Boyne Valley, so we ventured to higher ground, near Slane, where I took this photo at a gate into a field. You can see Cúchulainn/Orion, with the Táin Bó/bull/Taurus above him to the right, and the dog star Sirius to lower left. Just above the V-shaped head of Taurus you can see the bright planet Jupiter. The yellow light behind the bushes is the floodlighting of the ruins on the Hill of Slane.
Posted by Dronehenge at 16:17