Interview about a giant fireball with Dundalk Democrat 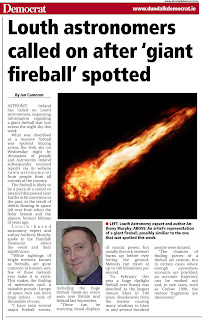 I was recently interviewed by the Dundalk Democrat (a newspaper of which I used to be Editor) about a giant fireball which had been seen in the night sky over Louth.

Although fireballs, which are very bright meteors or shooting stars, are very common, much less common is the occurrence of fragments of a fireball hitting the ground.

Astronomy Ireland chief David Moore regularly calls upon the public to help provide information about fireball sightings. He is hoping that a precise path of a fireball witnessed over Ireland can be triangulated in the hope that perhaps some fragments did hit the ground and can be recovered.

Most fireballs don't make it to the ground, burning up instead in the atmosphere. However, in 1999 fragments of a fireball were recovered in County Carlow after an extensive search. Here is the text of the article:


ASTRONOMY Ireland has called on Louth astronomers, requesting information regarding a giant fireball that tore across the night sky this week.
What was described as a massive fireball was spotted blazing across the Irish sky on Wednesday night by thousands of people and Astronomy Ireland subsequently received reports via its website (www.astronomy.ie) from people from all corners of the country.
The fireball is likely to be a piece of a comet or asteroid that passed near Earth’s orbit sometime in the past, or the result of debris floating in space left over from when the Solar System and the planets formed billions of years ago.
Louth-based astronomy expert and author Anthony Murphy spoke to the Dundalk Democrat about the event and its significance.
“While sightings of bright meteors, known as fireballs, are quite common in Ireland, very few of these meteors ever make it to earth. This makes the finding of meteorites such a valuable pursuit. Lumps of space rock can fetch huge prices - tens of thousands of euro.
“I have seen several major fireball events, including the huge fireball break-up event seen over  Britain and Ireland last September.
“These can be stunning visual displays of cosmic power, but usually the rock (meteor) burns up before ever hitting the ground. Meteors can travel at up to 100 kilometres per second.
“In February this year a huge daylight fireball over Russia was descibed as the largest meteor blast in 100 years. Shockwaves from the meteor caused many windows to blow in and several hundred people were injured.


“The chances of finding pieces of a fireball are remote, but in certain cases where enough eyewitness accounts are provided, an accurate trajectory can be worked out and, in rare cases, such as Carlow 1999, the meteor fragments are discovered.”
Posted by Dronehenge at 08:09