Rare exquisite drawings of Newgrange from 1866

These two drawings of Newgrange are extraordinary. I've never seen them until today. And even though I've written a book about Newgrange and might be considered something of an expert on the monument, I'm pretty sure I've never seen them replicated in any modern book on the subject. I could, of course, be wrong, but certainly I have no memory of ever seeing them before. Which is why seeing them today for the first time has been such a beautifully pleasant surprise. They were published in a book (it's name I will reveal in another blog post soon!) in 1866, and so belong to a time when we weren't exactly sure what Newgrange looked like. We have earlier drawings and paintings, by the likes of Vallancey and Ledwich etc., and then photographs from the late 19th century onwards. Here is a unique moment in the Newgrange timeline. The mound is considerably overgrown with trees. In fact, they almost smother the entrance. There is something extraordinarily romantic and evocative about the above drawing.

Views similar to the one below have been seen before, but I've never seen an early drawing or sketch from that particular angle. Again, I think that this might be a unique image, having not seen the light of day in modern times. I am, of course, open to correction, and if anyone can put me right, please do! 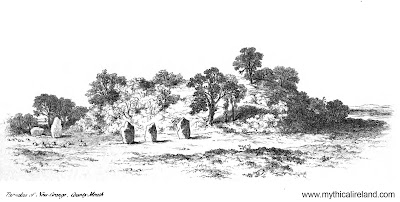 I've gone to the trouble of performing a Google Image search and these two images don't have a match, so it would appear they are not on the internet at all - until now. There is a not dissimilar view to this one contained in a book by David MacRitchie called 'Testimony from Tradition', published in 1890:

I would be very interested in hearing from anybody who might have seen the first two images before. I have checked any books about Newgrange here in my own library and am pretty sure that it is not featured in any of those.