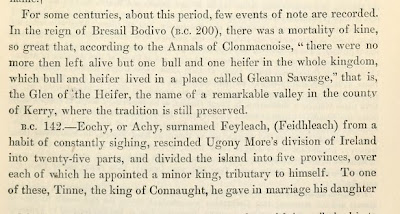 The above story about Bresail Bodivo is from Martin Haverty's The History of Ireland, Ancient and Modern (1867). It quotes from the Annals of Clonmacnoise a story which is familiar from the Metrical Dindshenchas - a story that appears to describe the reason the Dowth passage-mound in the Boyne Valley was built. Here is the Dindshenchas version. The above version from the Annals of Clonmacnoise names the valley where the bull and heifer lived - Gleann Sawasge.
Posted by Dronehenge at 13:15 2 comments:

Some wonderful reviews of 'Land of the Ever-Living Ones'

Now that people have had a chance to read 'Land of the Ever-Living Ones' and to reflect upon its story and its meaning, the book is receiving some fantastic reviews. Here is a selection of those reviews:

Simon W. Kennedy (author of 'The Year the Whales Came In' and 'Sacred Cows, Silent Sheep'):

As the name suggests, this beautiful little book is about the Otherworld of Irish Mythology. To say this is an enchanting book is to understate its charm, but more, especially to understate its intellectual and mystical provenance disguised in dialogue between an older man (the sean-draoi) and the quintessential inquisitive young boy.

One of the great beauties of this work is the lightness with which its wisdom is conveyed and the depth of soul it so simply imparts.

The ancient Irish of prehistory recounted their explanations of life in antique mnemonic sagas too turgid for those with a passing interest.  In what he describes as his first novella and a departure from the analytical and in-depth, field-researched 'Island of the Setting Sun', which was strident in putting the barriers of intellectual snobbery and archaeological pedanticism aside, in order to open minds to fresher, more imaginative means of consideration and to challenge all comers to consider what was staring them in the face and  those “elite” who considered his observations, too obvious to be considered of any great merit. To their chargin, his analysis of the centrality of alignments of various sites added fresh stimulus to topographical interpretation in line with its soul companion – the mythology of the earth and stars.

In this current endeavour he draws heavily on his encyclopaedic knowledge of the stars and the universe and lays out a tapestry in front of the reader, not unlike what one might have expected of Copernicus and brings to life the ancient lights that illuminate our skies with dimensions of distance, vastness and most tellingly the colour and feel that Irish mythological accounts of the footsteps through the stars of the ancient Irish Gods recounted in these mythological stories. Most inspiringly, he demonstrates, through his conversational motif, and connects, the interaction between the heavenly bodies with those of their observers here in this world, not just then, but breathtakingly, makes it relevant in our times in such a simple poetic style as to be readily and easily consumed by those of an age with his sean-draoi and this attentive pupil to those of any age, in our own time.

In attempting to describe the process it is perhaps easier to do a greater disservice than service to this extraordinary, exquisitely, beautifully presented novella. Its appeal is universal -  and to all ages.  It also costs less than  €10!   If you want to open your mind to the delights and insights of our ancestors who formulated our culture, this "bottle" of pure mystical spring water will refresh your imagination, and resurrect a curiosity within you, of your affinity to your identity and your past.

In our youth all of us will remember some seminal small beautiful book – A Treasury, the Victorians called it  – which found a place in our hearts.  Give this to your child and his or her imagination will be given a key to the door of adventure, and a code to the stars, and our connection with them, that will last. Give yourself a present of space and an hour or two to read and reflect, and like Oisin in Tir n-Og, you will return to this world, reluctantly, but enriched.

Land Of The Ever-Living Ones is a treasure trove of great imagery, relating to the heavens and the earth. It brings the earth to the sky, and the earth back down to earth, through the fine-tuned eyes and observations of an old man, in conversation with a boy. It allows the reader to blend it with the voice of the old man.  It makes the universal personal. It transcends the ordinary, yet keeps the simple way. I recommend it highly.  It will bring you to places both familiar, and strange, both firmamental and local. (Read more about Tomas here)

Richard Moore (my co-author on 'Island of the Setting Sun'): 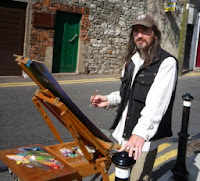 The bludgeoning of the senses by the so called Celtic Tiger years has left a generation of children and young adults with a shallow perspective of what life is about. Brutalised into insensitivity with their natural world. Bred not to think for themselves and to become a machine for base thoughts. Their individual uniqueness is discarded and replaced with homogenous banality.

'Do not think for yourselves' seems to be the mantra for this generation, to make them become depressed and suicidal with no or care or thought for themselves or their children.

Material gains are never satisfied and fulfilment is never reached because they have forgotten how to think for themselves… and more importantly … they have forgotten who they really are .. But this little diamond of a book is the perfect antidote for this sickness that has spread over the land indeed the world. Because it reminds us of our ancestors whose wisdom and understanding of our existence is laid bare as we listen to the old man tell the young boy of his unique and precious place in the cosmos of our lives on this earth. This book is beautifully written, beautifully told … A treasure to behold and pass on… 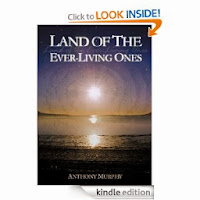 This short novel by author Anthony Murphy introduces the reader to many of the famous ancient Irish landmarks, personalities and stories of Irish antiquity. A old man, a seer with visionary wisdom explains to a inquisitive boy the mysteries of the Irish cosmos. The author takes us to a time when knowledge and learning were passed orally. It was the Celtic learning process of question and answer. We are transported Ireland's Newgrange monument "Brug na Boinne" for a magical, metaphorical journey from the darkness into the sacred light. It was there, that only on the winter solstice, sunshine would illuminate the interior and its art. This luminous excursion into the Irish otherworld is reminiscent of the mystic writer George William Russell (AE) who penned "The Candle of Vision". We are also invited to see our ancestors as a continous wisdom source, a well of knowledge and not a forgotten, dead and gone, memory of the past. This novella of hope will be like my Anam Cara, my soul friend. (See the review here)
Posted by Dronehenge at 11:09 No comments:

Posted by Dronehenge at 02:55 No comments: