Science and mysticism - the genius of the Stone Age

The more insignificant modern man becomes - on his shrinking earth, hardly a cosmic speck - the more arrogant he is. He feels far less humility toward the ever-vaster unknown than his forefathers did toward what was thought to be known in a flat, God-ruled, man-centred universe. Science does not seem to touch man's emotions at all: he loses his religious awe and acquires in its place only a boastful complacency about himself. His intelligence grows, but not his genius.
- Philip Freund. 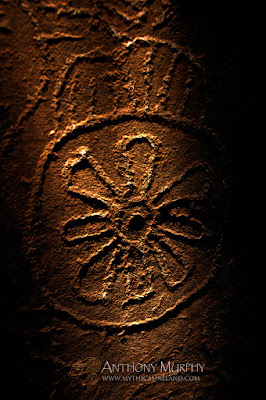 The photo shows a symbol carved into the stone at the very rear of the chamber of Cairn T, Loughcrew, Ireland. It was likely carved there more than 5,000 years ago, by a society of people for whom, I believe, science and spirituality were not considered as separate things. Indeed, I believe our ancient ancestors expressed their genius by grafting huge edifices in stone, lasting memorials to a time in the story of humanity when people had what Fruend refers to as "inventive mind, poetic aspiration, and awe-filled heart" - and yet they watched and measured the movements of the sun, moon and stars. They were, in my opinion, equally adherents to empiricism, metaphysics, philosophy and mysticism. They were farmers, engineers and astronomers, but they were most likely also poets, diviners and shamans, as suggested in mythology. They were both scientists and mystics.

I believe that they saw themselves as one with a cosmos that was vast beyond comprehension. They were neither athiest nor agnostic - but held a deep hope and belief in the existence of an afterlife. The great mounds of the New Stone Age are the best physical exemplifications of this belief. At the end of life, the burnt or unburnt fragments of the individual were lovingly and delicately placed in the chambers of these sacred spaces, from which, it could be implied from the construction and alignment of these monuments towards the rising and setting places of the heavenly bodies, the soul of the deceased was magically transported to the next realm.

The people who built the temples of stone that are Cairn T and its sisters on the ancient hills of Loughcrew, and indeed the vast monuments of the Boyne, which mark a zenith of that society, did so, I believe, in unity and zeal towards a shared belief. Joseph Campbell said that the "awakening of awe, that awakening of zeal" is what pulls people together.

In relation to the great cathedrals of Europe, Campbell said "you mustn't think of slave drivers; that isn't what built the cathedrals. It was a community seizure, a mythic zeal."

The same is probably true for the mound builders.

So what happened to the culture that dedicated itself to fervently building these innumerable mounds and cairns across ancient Ireland?

In the words of Campbell, "the zeal disappeared".

In my opinion - and it is just an opinion - our sense of the cosmic, and the awesome, and the everlasting, and the transcendental, became diminished when we became fascinated with the material, and the corporeal, the earthly, the ephemeral. When bronze arrived, and later iron, we perceived that we need not dream of otherworlds to give us power. We could fashion gleaming possessions - decorative and combative - and this gave us a sense of our own authority over nature. We could transform the murky raw materials of the earth magically into jewellery and weapons. We became alchemists, magicians. We no longer needed to divine our place in the cosmos and in the frantic and at times incongruous schemes of life. We could, we believed, impose our own will upon it. Spirit moved aside a little - or was pushed - and ego took centre stage. This conflict of spirit and ego is perhaps best epitomised in the battle between the Tuatha Dé Danann - the owners of the sídhe/mounds - and the Milesians, who came from Spain to take Ireland from them, driven by mixture of revenge and a jealous longing for a country that they beheld as being so beautiful it looked like the clouds of heaven.

Instead of the Dé Danann Elcmar, who stood on top of Newgrange at Samhain with a fork of white hazel, the archetypal mystic - a diviner, a druidic wise man - we became the Milesian Eremon, who wished to take ancient Tara and impose the domination of a new force upon the land. The symbol of that imposition would become the Lia Fáil - the phallic stone of kingship that would scream when the rightful king placed his foot upon it. And thus at Tara even today it is possible to discern the transformation that occurred after this battle between spirit and ego. The old ways are represented by Duma na nGiall - the Mound of the Hostages that rises out of the earth like a pregnant belly, the mother who is at once part of both world and cosmos. The new ways are represented by the Lia Fáil, the phallic stone placed there in an act of imposition, declaration, and perhaps banishment. We shouldn't be surprised to think that the Neolithic culture was a matriarchal one - its stone chambers are somewhat uterine in design - although we get the distinct sense of a polytheistic society when we take account of mythology which may or may not date to that remote time. But the cultures that followed - in the Bronze Age and Iron Age - created enclosures and ramparts encircling the sacred hill that I believe attempted to make a statement that - instead of considering the monuments to be an extension of the earth, saw the earth as being enclosed within a new system of ownership and dominance. We were no longer an emergence from cosmos. We were an imposition upon it.

The Lia Fáil - the phallus - is another icon of imposition, and the patriarchal nature of that imposition. We planted it there as a symbol of our wish to claim ownership, dominance and control over the land. We did similarly when we planted a flag on the moon. We went there at considerable expense in the greatest single achievement of our era, but we did so as much as as an act of imposition and ownership as we did as an act of scientific exploration or altruistic humanity. We want to own the moon.