Several years ago I wrote about the Cygnus Enigma and the apparent orientation of Newgrange towards Fourknocks and the orientation of Fourknocks towards a place on the horizon where the brightest star of the swan constellation (Cygnus) would have been rising after its brief glance with the horizon towards the north. Recently I've been looking at this alignment system in more detail, and that study has yielded more interesting results and fascinating possibilities.


I will summarise what's been written already, before going into new detail. In a nutshell, Newgrange points towards Fourknocks, although neither site is visible from the other. Fourknocks lies about 15km (approx. 9 miles) to the southeast of Newgrange. There are two intervening hills that block the intervisibility of the sites - Red Mountain and Bellewstown. Fourknocks lies at approximately 137.95 degrees of azimuth from Newgrange, according to Google Earth. This would place it on the edge of the range of azimuths covered by the Newgrange solstice alignment, which, according to Patrick (1974) were 133° 42' to 138° 24', while Ray (1989) says the range is 133° 49' to 137° 29'. The best way to try to visualise this is that as the sunlight is retreating from the chamber of Newgrange at solstice, the sun is directly above Fourknocks.

Fourknocks, in turn, has a passage that is aligned to approximately 14° azimuth, in the far northeast. Richard Moore and I had suggested that Fourknocks is aligned in the direction of the Baltray standing stones on the northern side of the Boyne Estuary (Island of the Setting Sun, 2006) and that the two stones lined up to point back towards Fourknocks, even though neither site was visible from the other. 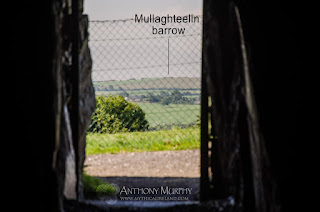 Sitting on the sill stone of the rear recess of the Fourknocks chamber, looking out through the passageway to the far horizon, one is looking at a hill towards the north-northeast called Mullaghteelin. Near the summit of Mullaghteelin, directly on the alignment as viewed from Fourknocks, is a barrow (ME027-034----), probably dating to the Bronze Age.

The photograph on right shows the view out through the passage, with Mullaghteelin barrow indicated on the horizon.

Using a map, or better still Google Earth, the alignment can be seen to continue through Donacarney village before crossing the Boyne river and pointing towards the Baltray standing stones. This is where Google Earth has real value in the investigation of long ley lines or straight track alignments. Zooming in on Baltray, we see that both stones are situated on the axis of this alignment from Fourknocks: 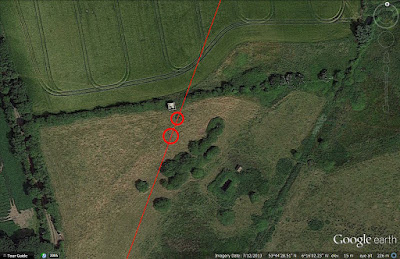 The two stones are circled in red - the larger stone has a bigger circle around it. We didn't have this wonderful program when we wrote Island of the Setting Sun in 2006, but it's wonderful to see how accurate the alignment really is. Whether this alignment was created intentionally is an entirely different matter, but one wonders, given the existence of several long-distance alignments of ancient monuments, if indeed the ancients had skills beyond which we give them credit for.


Here's where it gets really interesting. If you continue the line from Fourknocks beyond Baltray standing stones, you will find that it eventually hits the shoreline on the Irish Sea coast at Clogherhead. It then travels across Dundalk Bay and eventually meets the shoreline of a stony beach on the southern shore of the Cooley peninsula at Rathcor/Templetown. Both of these shores –  Clogherhead and Rathcor/Templetown – were locations where stone for Newgrange was sourced. 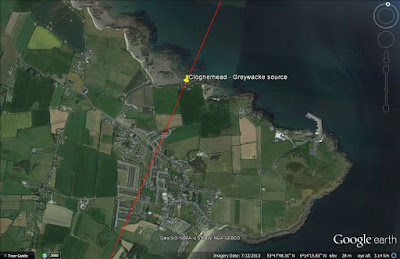 Clogherhead (above) was the source of the greywacke slabs that were used as kerbstones, passage orthostats and large structural stones in the chamber of Newgrange. An estimated 200 of these rocks, weighing on average three tonnes apiece, were brought from the shoreline at Clogherhead by boat down along the Irish Sea and up the river Boyne to Brú na Bóinne. For more about the transportation of these greywacke slabs, see Newgrange - Monument to Immortality. 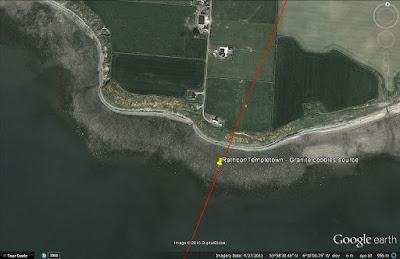 Rathcor and Templetown beaches are littered with rocks of all different types and sizes. Most interesting of these are the granite cobbles which, it is said, were brought from this area to Newgrange to be placed among the white quartz stones that decorate the front of the monument. Again, these would have been transported by sea, across Dundalk Bay, around Clogherhead and then up the Boyne.

So, whether by accident or design, the Fourknocks passage points towards two of the three locations from which it is said that stone was sourced for the construction of Newgrange.


Just for the sake of it, I looked at the alignment in the opposite direction, south-southwest from Fourknocks. Interestingly, it points towards the Blessington Lakes in Co. Wicklow, some 30 miles or 50 kilometres distant approximately. Now this really is a stretch of the imagination, I'll readily admit, but we've all been told that Wicklow is the likely source of the milky quartz at Newgrange, although the exact location or quarry from which it was extracted has never been found. I've heard it suggested that Blessington is a possible source. It could have been transported from that area by barge down the Liffey River into the Irish Sea and from there up to the Boyne. 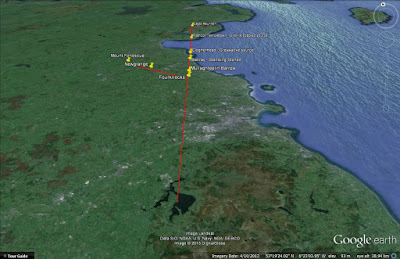 If the Blessington area turned out to be the source of the Newgrange quartz (and it's by no means anything other than a possibility at this point in time), then the Fourknocks alignment would "point to" all of the major sources of stone for the construction of Newgrange - the greywacke from Clogherhead, the granite cobbles from Cooley and the quartz stones from Wicklow. As it stands, we can say that Fourknocks definitely does point to two areas from which stone was sourced. The third remains an unknown, but Blessington is a possibility.

More recently, Rockabill islands off the coast of Dublin have been suggested as a possible source of the milky quartz at Newgrange. This is equally interesting, because the larger of the two standing stones at Baltray points towards Rockabill for winter solstice sunrise.

Just to finish, the Fourknocks alignment also points to a peak called Eagle Mountain in the Mourne Mountains in the far distance, which are easily visible from Fourknocks on a clear day. I'm not sure if there's any particular significance to this peak to tie in with the alignment. Geologists have told us that the cobble stones from Rathcor/Templetown have their origin in the Mournes. It has recently been revealed that an x-ray study of the granite cobbles of Newgrange is to be undertaken to ascertain their precise original source. Read more here.
Posted by Dronehenge at 04:56