Heaven's mirror - as above, so below at Knowth 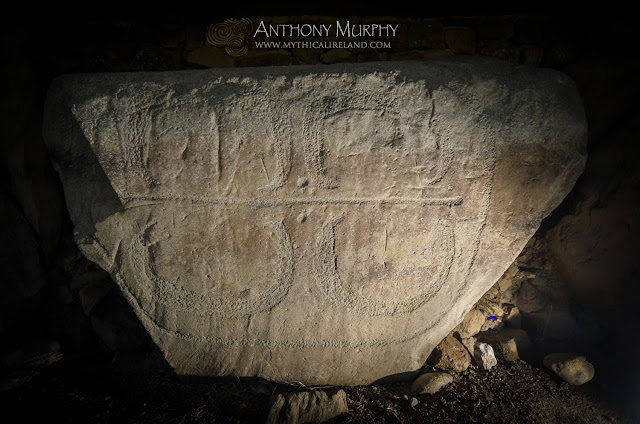 The interpretation of megalithic art is a highly subjective area. I have a tendency to go along with some, but not all, of Martin Brennan's interpretations, and am particularly impressed with his interpretation of what he calls the Calendar Stone. This does not mean I am an absolute convert to the notion that all of the Neolithic symbolism carved on stones in the Boyne Valley is cosmic or astronomical in nature. I like to observe and to admire the art, and in some cases to interpret it in the context of astronomy. But what works for the interpretation of one stone does not necessarily transfer to other stones. There's so much art - particularly at Knowth, where one is constantly impressed by the sheer amount of petroglyphs that one wonders how many different people were responsible, and over what span of time. I've been going there for years, and I still stand in awe at this massive megalithic art gallery, grafted carefully and lovingly all those millennia ago.

The above kerbstone is kerb number 86 (according to Professor George Eogan's numbering convention, which we'll use for convenience). It is located on the western side of the kerb, a short distance north of the dramatic and cryptic entrance to the western passage.

So what do I see?

Do I see the C? The opposed Cs, as George called them?

Well, kind of. But I don't think like an archaeologist. So I dislike the simplicity and arbitrary nature of labels like "opposed Cs". I don't think the people who carved them thought of it that way at all.

So what do I see? Do I see what I want to see? Perhaps.

As an astronomer, I might see crescents; crescent moons. And I believe the moon is everywhere in megalithic art. But no, in this stone I see more than that. Here follows my (very subjective) interpretation - and remember that the tour guides at Newgrange tell you that you can all have your own theory, and that everyone's theory is as valid as anyone else's. So here is my just-as-equal-as-yours theory about kerbstone 86 at Knowth:

I might see the arc of heaven. I might see the Milky Way, in all its glory, stretched in a spectacular arch across the ceiling of night, in the beautiful ancient Boyne Valley under the darkest of skies, unpolluted by the choking fumes of modern industry and transport, and unhindered by the artificial light with which we so alienate ourselves from the cosmos today. And I might see this milky road of the stars, this bright way of the heavens, reflected on earth by the Boyne river, which loops magnificently around the great monuments of Brú na Bóinne. Did the ancients think this way? Did they think cosmically? Did the monuments somehow proclaim their tiny place of presence and permanence in a vast cosmos?

Do these carvings on kerbstone 86 at Knowth represent the idea of Heaven's Mirror - As Above, So Below? Is the sky reflected on the ground? Is the line in the middle representative of the demarcation, the liminal boundary between heaven and earth? All of the symbols are enclosed in a sort-of great cartouche, perhaps an indication of the cosmos as an entity with limits - something that ends where the stars are fixed, where the souls go after we gently place their remains in the stone chambers, perhaps?

Or is this stone's symbolism representative of opposed worlds (or even mingling worlds) rather than opposed Cs? The sídhe (mounds) were considered access points through which the Tuatha Dé Danann could pass between worlds - between this world and the otherworld:

And as to Angus Og, son of the Dagda, sometimes he would come from Brugh na Boinn and let himself be seen upon the earth,

Say what you C. You are unlikely to be proven wrong. But have a go at interpreting it. Because if you don't, someone else will. Someone else will C what you don't C ...
Posted by Dronehenge at 14:45