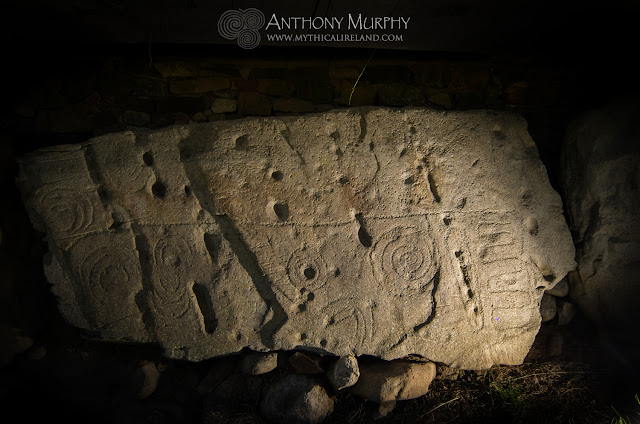 This is kerbstone 83 at Knowth – or, if you prefer Martin Brennan's numbering system (which I don't), kerbstone NW9. Professor George Eogan, who excavated Knowth, refers to the style of art on this stone as the "lavish style". He does not offer any further insights into what the carvings might mean. Who can blame him? Brennan suggests the mixture of natural holes and cupmarks "seem to provide a starry background" to lunar imagery. This is indeed a peculiar stone. It's got a series of natural holes and linear markings (maybe a geologist can tell us what they might be called) and engravings that are mostly crescents, with some concentric circles centred around what might be a natural solution hole. There's also a spiral and a wavy line. A very long linear marking across the middle of the stone appears to connect a series of crescents on the far left with a "wavy line" as Brennan calls it, on the right. Curiously, a series of five natural holes (at least they look natural and not man-made) between the spiral and the wavy line appear to be enclosed within a cartouche. One wonders why. The stone is unique in having such a conglomeration of natural features and man-made designs.
Posted by Dronehenge at 15:32