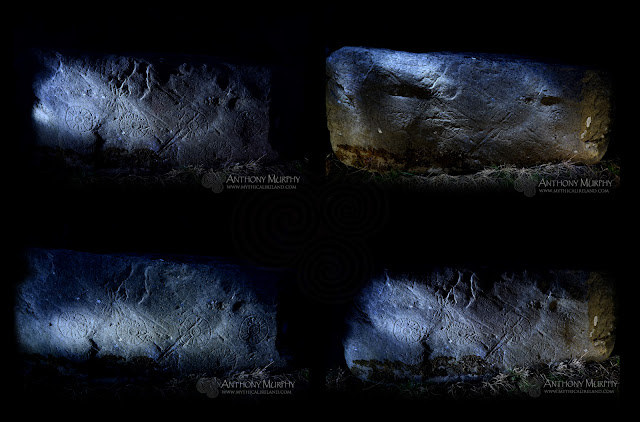 On Saturday last, the eve of Summer Solstice, my son Luke and I headed out into the Boyne Valley in the hope of getting a photo of the triple conjunction of Venus, Jupiter and the Moon at Newgrange. Unfortunately after the sun set a bank of cloud rolled in, obscuring the triplet before we could get any decent photos. Not to waste an opportunity for a photograph (I rarely do!), we headed to nearby Dowth, where I decided to play around with torches and flashes using my favourite stone-lighting technique – painting with light. You might have seen a previous post from the same night here.

The stone above is famously known as the Stone of the Seven Suns. It was so named by Martin Brennan, an artist and writer who made several significant discoveries about ancient astronomical alignments in Ireland. There are several theories as to what this stone might mean. It is one of just a few stones that are completely exposed. Many of Dowth's 115 kerb stones still lie either partly or totally concealed beneath the earth and vegetation.

I tried to use torchlight and flashlight to illuminate the stone from different angles to show as much of the art as possible. These carvings were made as long ago as 3,300BC and maybe even earlier. In certain lighting conditions, this stone can appear quite flat and the carvings don't stand out. The best time to see it is coming up to midday, with the sun lighting it from the side. Otherwise, a long exposure photograph with a light source from the side, or above, helps to show up the markings very well.
Posted by Dronehenge at 15:29