I had the pleasure of spending a couple of evenings out at Newgrange this week, following the very recent Summer Solstice.Tonight's visit was especially beautiful. I saw the sun going down and there was a beautiful sky at the time. This was followed by a lovely red sky and a vivid lingering twilight. 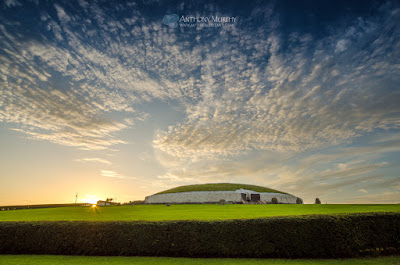 Taken tonight, a week after the Summer Solstice, with the sun's setting position not having moved much in a week, you can see how the sunset at this time of year is opposite the winter sunrise, towards which the passage opening points.

From here on in, the sun begins its slow retreat southwards, with the inevitable shortening of the days that comes with it.


Right now, the twilight lasts throughout the night. This will keep happening for another couple of weeks, but after that the evenings will start to draw in again.

This is something that must have had quite a dramatic impact on the minds and lives of the people of the Stone Age. The passage of the sun from its strongest to its weakest is surely something around which the monuments and some of their mythology was based. It's easy to see why this would be the case. The long days of light in the summer seem everlasting. This might have been what the legend of Dowth referred to.

Although I love this time of year, and the warmer and brighter days, they are always tinged with a sense of sadness too, because these days don't last. The endless twilight of midsummer is fleeting, and the year turns again quickly. The retreat of the sun back towards the south gave rise, I have no doubt, to numerous myths involving themes such as darkness and the vanquishing of one foe or hero by another. At Newgrange, this is best exemplified in the myth of Aonghus Óg, who takes Síd in Broga (the old name for Newgrange) from his father, Dagda, the chief of the gods. He does this by asking him for possession of the Brug for one day and one night. When the Dagda asks for the return of the Sídhe, Aonghus says "all of time is made up of night and day" and thus, through cunning, takes permanent possession of Newgrange from his father.

Perhaps Aonghus Óg, Aonghus the young, represents the coming of the new sun at winter solstice, and the growing of the year that results, and he takes possession of the mound from the older, dying sun of the previous year.