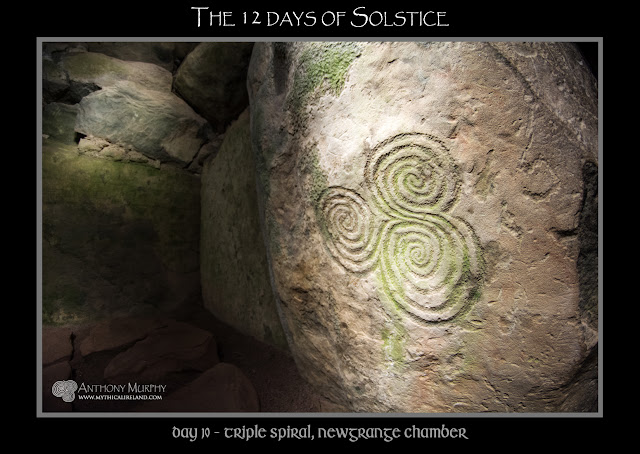 This carved design, on the side wall of the end recess in Newgrange's chamber, is one of the most readily identifiable symbols from the ancient megalithic world. It is a design that is unique to Newgrange. It is not found anywhere else. It's often referred to as a triple spiral, but this is not an entirely accurate description of it, as Clare O'Kelly pointed out in her description of this stone:

C10, the three-spiral stone (often wrongly called a triple spiral: since a double spiral, like those on the entrance stone, consists of two parallel coils, by analogy a triple spiral should consist of three; in fact, the design consists of three double spirals, the two on the right being S- or returning spirals as well). In order to integrate the left-hand spiral into the design the two free ends of its outermost double coil were separated so as to sweep concentrically around the two other spirals and to meet again having encircled the S-spirals. The whole pattern is only 30 x 28 cm. The spirals are beautifully picked in broad shallow channels so that the intervening bands stand in relief. The design is executed on the undressed surface, but an area of pick-dressing on the left partly encroaches it.(1)


One thing the archaeologists tend not to do (although that is not an exclusive tendency) is to try to interpret the meaning of the symbols. There are many, many theories as to the meaning of the triple spiral (should that be the triple double spiral?) Its position within the end recess, but on a side wall, means that, contrary to some speculation on the internet, the winter solstice sun beam does not strike it directly. Rather, it is illuminated by reflected light. So what does it mean? Does it mean anything?

My own speculation has revolved around the mythology and the astronomy of the monument. In myth, there are two significant "trinities", or trios of figureheads. Tochmarc Étaíne (the Wooing of Étaín) is believed to have been written in the eighth or ninth century AD, but the true genesis of its story cannot be known. It describes how Dagda, the chief of the god, the Tuatha Dé Danann, desires Bóinn (the goddess after whom the River Boyne is named). He sends Bóinn's husband Elcmar away and lies with Bóinn and they conceive a son, Oengus Óg. So we have father god, mother goddess, and divine offspring. The second trinity consists of Lugh, Dechtine and Sétanta. Dechtine comes to Newgrange in wintertime from Emain Macha (Armagh) and while there Lugh (another of the chief gods) appears to her in a dream and tells her she will bear a son, and that he will be called Sétanta. Sétanta later becomes Cúchulainn. Perhaps the triplicate of spirals represents the trinity of gods?

Separately, we find that several heavenly objects cast their light into Newgrange. One of these, as we know, is the sun. Each year on Winter Solstice, the light of the rising sun enters the long corridor of Newgrange and shines into its inner chamber. What is much less well known is that sometimes the full moons in summertime shine into Newgrange. Further to this is the fact that Venus, as the Morning Star, is said to cast a beam into the chamber of Newgrange once in eight years.