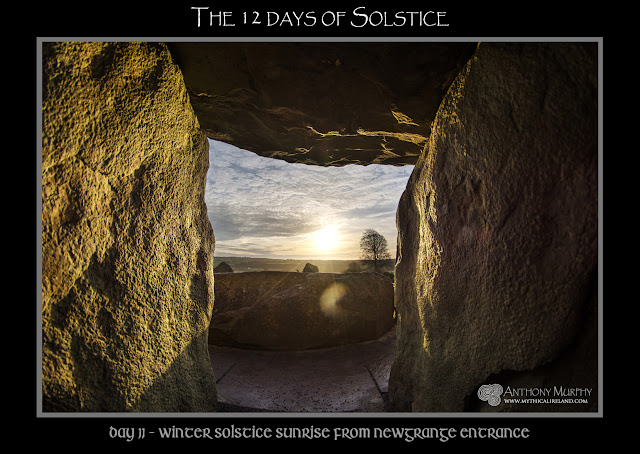 It's day 11 of my new series of photographs entitled 'The 12 days of Solstice'. This is the second-last image in the series. It shows the sun not long after it has risen on the shortest days of the year at Winter Solstice. The picture was taken just inside the entrance of the passage of Newgrange. Above my head in this image is the specially constructed aperture known as the 'roof box'. This is the portal which allows sunlight to penetrate the entire length of the passage and into the chamber. The light that enters through the actual doorway does not reach the chamber floor. The two beams of light are kept separate by the stone seen in the top of this image.

Immediately in front of the entrance is the large kerb stone, K1, which on its front side (the side facing the sun) has the famous tri-spiral design among other lavish engravings. At the time this photo was taken, the sun's light had already left the chamber again. It shines in there for 17 brief minutes. There is something very special about the quality of the light immediately at sunrise. As soon as the sun rises above the ridge known as Red Mountain (Roughgrange), its golden light reaches into the corridor of Newgrange and shines a narrow beam of light onto the darkened floor of its central chamber. It is at this moment that the year is seen to have reached its turning point. The old year dies and the new year is born. Dagda, the father god, yields ownership of Síd in Broga (Newgrange) to his son, Oengus Óg, the youthful sun.

From this moment, following a period of about a week when the sun's rising position has stood still on the horizon, it begins its slow movement back towards the east, and after a few weeks the light will get stronger and the days longer.
Posted by Dronehenge at 23:49