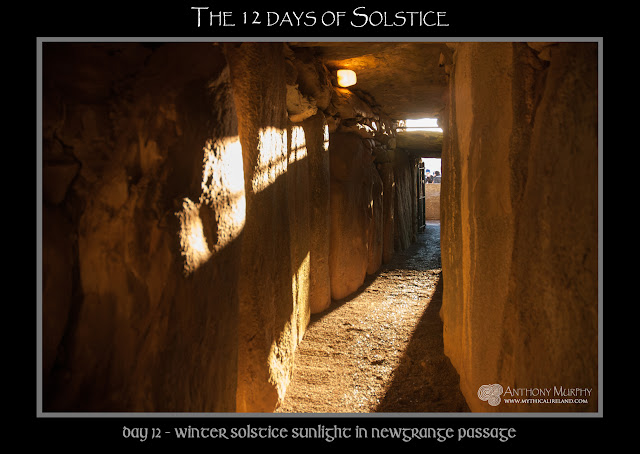 Winter Solstice has officially arrived. Today the sun reaches its minimum declination - its furthest southerly position in the sky. This is the turning point of the year. As the sun rises above Red Mountain in the Boyne Valley this morning (weather permitting), its light will enter through an opening above the passage entrance known as the 'roof box' and will illuminate the central chamber, which lies about 20 metres inside the cairn, for around 17 minutes.  The lucky Winter Solstice Lottery winners will be inside, while hundreds will gather outside. This year, there will be 20 Irish wolfhound dogs at Newgrange too. It should be a great morning.

The photo shows a view taken on Winter Solstice 2010 just as I was emerging from the chamber where I had witnessed the solstice illumination for the first time. As you can see, there are two beams of light. The main area of light, on the floor and the lower part of the passage orthostats, enters through the main doorway. This might have been closed by a large slab during winter solstice ceremonies in ancient times. The upper beam is a much shallower beam, and is visible higher up on the orthostats in the left of the image. This is the light that comes in through the roof box, and it is only this beam that reaches the floor of the chamber within.

As we reflect upon the coming of the glorious light of dawn into the dark void, and the turning of the year, we hope that events in the wider world which have led humanity into darkness in recent times will turn also, and that the hearts of those who have resorted to anger, hatred or fear are softened, so that we can better learn to get along with each other. For that is one of the central themes of the ancient myths involving the Tuatha Dé Danann, the gods who were said to have owned and built Newgrange. When the Milesians came from Spain, to take Ireland by force, there was initially some fighting and, after losses on both sides, the Dé Dananns and the Milesians reached an accord. The Dé Dananns would occupy the sídhe, these great palaces of stone and earth that allowed access to and from the otherworlds, while the Milesians would occupy the surface of the land. And so it is that we must learn to get along with our fellow humans. We must learn to get along together. What is the alternative, except suffering and misery?

Today, as the sun shines into the heart-shaped mound of Newgrange, and warms its interior with a golden light, we ask that a light shines into the hearts of all our fellow human beings, that we might learn to reach an accord that looks to the ending of hate and discrimination, and allows for a peaceful settlement of all conflict. That is the most urgent message from Newgrange for today's world.
Posted by Dronehenge at 23:01