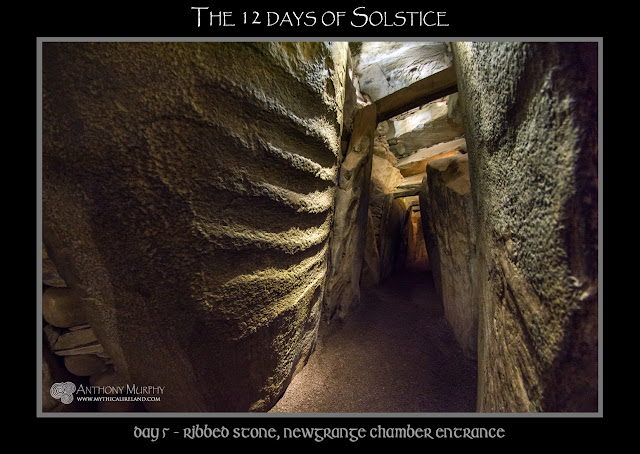 It's day 5 of 'The 12 days of Solstice' and today's image is a photo of passage stone R21, which lies at the threshold between the passage and the chamber of Newgrange. The grooves and ridges which have been formed on this stone by picking remind one perhaps of ribs. On the morning of winter solstice, the sunbeam strikes the bottom of this stone before passing into the chamber.

This highly unusual ribbed stone is not entirely unique. Another passage stone, R12, features three similar grooves. Their meaning is not known. I cannot help thinking of a rib cage, and in particular an obscure myth from the Boyne Valley which may be one of Ireland's original creation myths. It is the story of the Mata, a giant monster that was ripped into pieces and thrown chunk by chunk into the Boyne River. The monster was killed at Brug na Bóinne. The myth seems typical of that cluster of myths around the globe which sees creation preceded by an act of dismemberment, something which leads creation myth author Philip Freund to entitle his chapter about it 'Out of the monster'. In all of these myths, he says, "the cosmos is carved out of some slain monster's body'(1).

In the case of the Mata, its remnants form natural features of the landscape. Note in this passage how it is distinctly stated that the monster was slain on a stone "in" the Brug of Mac Oc (Newgrange):


When the men of Erin broke the limbs of the Matae, the monster that was slain on the Liacc Benn in the Brug of Mac Oc, they threw it limb by limb into the Boyne, and its shinbone (colphta) got to Inber Colptha ("the estuary of the Boyne"), whence "Inber Colptha" is said, and the hurdle (clíath) of its frame (i.e. its breast) went along the sea following the coast of Ireland until it reached yon ford (áth); whence "Ath Cliath" is said.(2)


Mata, which is an Irish word meaning "great, dark, gloomy", was destroyed at Newgrange. He was thrown, in pieces, into the Boyne, where his ribcage (clíab/chléib = of the framework of the ribs) made its way down along the coast and formed the ford of the River Liffey in Dublin.

Another curiosity is the fact that, viewed from the passageway looking towards the chamber, this ribbed stone has the shape of a salmon. The Salmon of Knowledge is an important story connected to the Boyne - to Fiacc's Pool, which is only a short distance upriver, between Rosnaree and Knowth.