The 12 days of Solstice - Day 6 - Venus, the Evening Star, in the winter twilight sky over Newgrange 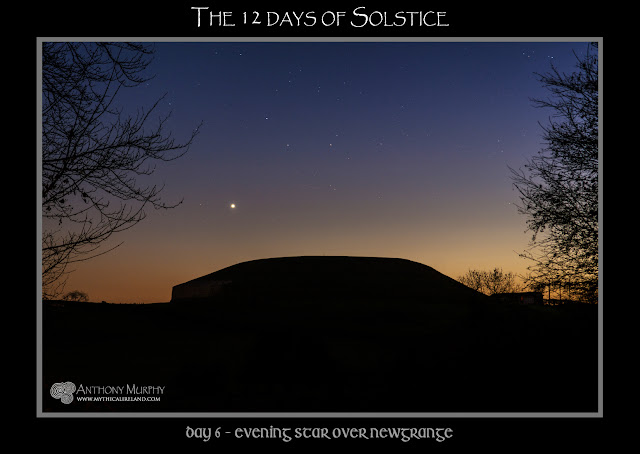 It's Day 6 or 'The 12 days of Solstice' and today's image features Venus, the Evening Star, over Newgrange at dusk in winter. The cycles of the heavenly bodies were undoubtedly recognised by early societies across the world. At Newgrange, the yearly cycle of the sun is definitively memorialised through the alignment of its passage and chamber with Winter Solstice sunrise. Less well known is the fact that at certain times of the year the moon can also cast its light in through the roof box and into the passage and sometimes the chamber.

The bright planet Venus, which is the third brightest object in the sky after the sun and moon, follows a distinct pattern over the course of eight years, sometimes appearing in the mornings before sunrise for a number of weeks or months, and sometimes appearing in the evening after sunset. After eight years, this pattern repeats. Could the builders have seen and known this?

Joseph Campbell wrote about a folk belief in the Boyne Valley that suggested the morning star cast a beam of light into the chamber of Newgrange once every eight years, at dawn. Uriel's Machine authors Christopher Knight and Robert Lomas suggest that a series of eight markings on the lintel stone above the roofbox of Newgrange represent the eight years of the Venus cycle. Indeed, on one year out of every eight, Venus rises on the morning of the Winter Solstice around an hour before the sun and an observer prostrate in the chamber of Newgrange would be able to see it through the roofbox.

In her guise as the morning star, Venus was known in Ireland as caillichín na mochóirighe, the 'early-rising little hag'.(1)

As you can see from the image above, Venus is a brilliant object. Compare it with the several stars visible in the image, which are much fainter. It is said that in complete darkness, away from city lights, the light of Venus casts a shadow. The folklore recorded by Campbell suggests that, once every eight years, the Morning Star "may be seen to rise and cast its beam precisely to the place of the stone with the two worn sockets".(2)

Further reading:
Do the myths about Newgrange and the Boyne Valley mounds offer an insight into their function?
Posted by Dronehenge at 00:05