The 12 days of Solstice - Day 7 - the eastern recess of Newgrange, the holy of holies, and its giant basins 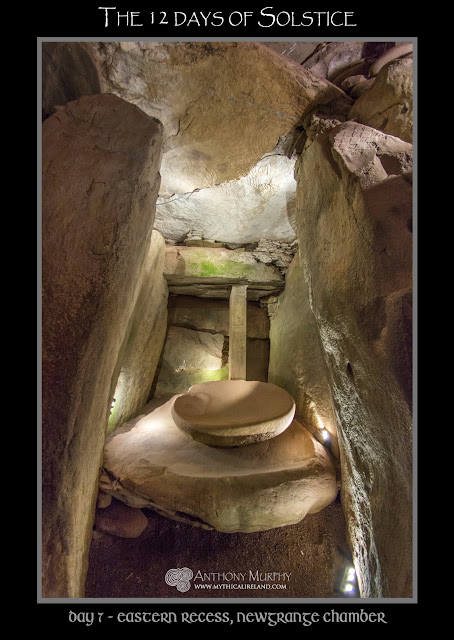 It's day seven of 'The 12 days of Solstice' and today's image features the eastern (right-hand) recess in the chamber of Newgrange. This is clearly a very sanctified space, a "holy of holies", so to speak. It is the largest of the three recesses and has features that endow it with a particular sense of preeminence, a place almost beyond encroachment by human thought or deed.

The recess features a highly decorated ceiling stone, something not shared by the other recesses (admittedly the end recess has the famous tri-spiral carved into a stone forming its side wall). It effectively has two basin stones - one sitting upon the other. The smaller of the two features two hollow depressions towards its rim, the purpose of which is not entirely clear. The larger "basin" is in fact an enormous slab whose top surface has been hollowed somewhat. It is clear that this giant slab must have been in position BEFORE all of the surrounding orthostats were put in place. It is certainly not the sort of thing that could have been dragged up the passage and hauled into place in the chamber after these structures had been completed. All of this begs a question - was this giant stone the first piece of Newgrange to be put in place when construction began? By necessity, it must have been one of the earliest phases of the construction of the monument we know today as Newgrange.

What took place in this sanctified space? Were these basins used for the placement of the fragmented remains of the dead? Over 2,000 bone fragments were found at Newgrange. Many were so small as to be unrecognisable. We are told at least five individuals were represented in the remains. But it could be a lot more. Clearly, there were methods of defleshing/excarnation, cremation, and perhaps there were even processed involving the pulverization of the remains of the dead. Were the bone fragments also washed before deposition in the sacred spaces within Newgrange and its sister sites?

The eastern recess might be dry today, but that certainly was not always the case:


Time and time again, from the rediscovery of the chamber in 1699 up until O'Kelly's installation of a protective concrete umbrella over the vault, water had been found to be dripping or trickling into the monumental slab and bowl in the righthand recess.(1)


This presence of water, despite the laborious efforts of the builders to redirect the flow of water across the capping stones of the passage, etc, led one author to suggest that the presence of water in this recess might have been intentional. Jacqueline Ingalls Garnett has speculated that the intention might not have been to deposit bones in the basins, but rather to bring them in there for some special ceremony involving this "holy water".


It is possible that the object was exactly to bring the packet of remains into contact with the solemn, numinous font whose water - perhaps mixed with dew - trickled from the heavens into the righthand-recess bowl. In fact, unless the entire monument had been built in order that one or two sets of bones could be laid in the bowl, the idea may well have been that it was somehow beneficial for the deceased that his bones should have an opportunity however brief to contact the water in the bowl perhaps by dipping or sprinkling.

It's an interesting idea, but one wonders to what extent the huge crack in the ceiling stone (which is obviously not an original feature!) contributed to this water ingress. Furthermore, we might ask if there are other monuments of similar age and design where this is seen to happen and is considered intentional.

Garnett points out something else that is interesting - the fact that a natural spring was present in the passage, a "winter-flowing stream" that emanated from under passage orthostat R8. This spring was culverted during excavation and reconstruction work, but might have been a crucial element of the sacred infrastructure of the site when it was built.

Whatever took place in terms of ritual or ceremonial activity in the eastern recess in prehistory, it remains a space that demands reverence. It's not a room or space that invites one to come in and stand around. It is very much a space that stands alone.