The 12 days of Solstice - Day 8 - megalithic art on kerb stone 52, one of three highly decorated kerbs 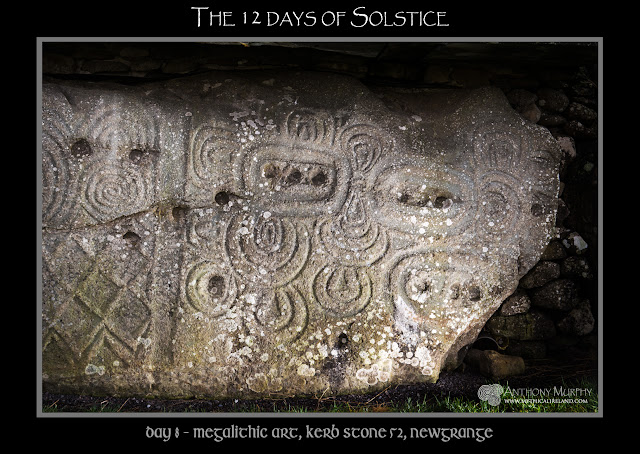 This is kerb stone 52 at Newgrange, which lies at the rear of the mound, exactly opposite the main entrance kerb stone. It is one of just three highly decorated kerb stones at Newgrange. The others are kerb 1, the kerb immediately in front of the entrance to the passage, and kerb stone 67, on the northeastern side of the kerb.

As you can imagine, interpretation of the symbols carved into stone at Newgrange and its sister monuments over 5,000 years ago is necessarily subjective, and there is a wide range of theories as to what various emblems and designs on different stones mean. My own view is that there's no great harm engaging in speculation - however, one has to be careful about ensuring that the archaeological evidence is not disputed by your theory. For instance, one gentleman I encountered some years ago insisted that symbols on a passage stone at Cairn T, Loughcrew, were figures including the biblical partriarch Jeremiah, sailing on a boat to Ireland. This same individual insisted that Newgrange is an Iron Age construction, and all the archaeologists are wrong about its date!

My own theory (and because it's just a theory, I could be wholly wrong about it) is that it might contain symbols representing Orion and Sirius. At the time Newgrange was built, around 3150BC, the declination of Sirius was -23º 2' 43.1". This means that its rising position would make it visible from the chamber of Newgrange, out through the roofbox. A prostrate observer on the floor of the chamber could have seen this "dog star" (or whatever it might have been called back then) night after night at certain times of the year. However, due to the effects of precession of the equinoxes, a slow wobble of the earth's axis, Sirius's declination was increasing, and over the next couple of centuries it would have drifted northwards, so that it was no longer visible from the chamber.

Some of the engravings on kerb 52 could be interpreted as representations of Orion's belt and Sirius:


On the right-hand side of the stone, there are three sets of three circular holes, known in archaeological terminology as "cup marks". Each of these sets of holes is contained within a double oval-shaped cartouche. There are a number of other cup marks on the stone, the most noticeable of which is one contained inside the vertical stripe in the centre of the stone. Is this Sirius, sitting on the axis of the site, which runs through the entrance kerbstone, K1, up the passage, and out the other side of the kerb in the centre of K52?(1)


Maybe it is, maybe it's not. This is the nature of speculation. But at the very least this theory fits the astronomical evidence and does not dispute the archaeological evidence - always a good starting point!

The presence of the vertical line or stripe on this stone led archaeologists to speculate that there might be another passage behind it. Prof. Michael O'Kelly excavated an area of the mound behind this stone in search of just such a passage, but no evidence of one was found.