The above video is a time lapse sequence showing the Stone of the Seven Suns (kerb stone 51) as it is lit up dramatically after sunrise in early December, with just two weeks to go to the Winter Solstice. The video features almost half an hour of footage compressed into one minute and 30 seconds. The symbols on the stone are thought to represent the sun, or perhaps even the sun during a solar eclipse, with ties in with the mythology about Dowth which suggests that its construction was abandoned when a sudden darkness fell over the land.

The time lapse footage reveals something fascinating. At first, the solar symbols are lit up quite dramatically, so that they are shown in excellent relief. Then, as the sun rises moves towards the south, a shadow from another kerb stone falls over the sun symbols - eclipsing the symbols one by one. If you can, make sure to watch the YouTube video at 1080 HD and full screen.

Unfortunately there was cloud blocking the sun early on, so the first of the seven sun symbols, which is on the far left of the stone, is already in shadow when the sun comes out. However, that does not spoil the show. Sit back and watch this marvel of megalithic magic! One can only speculate as to whether this "light and shadow" show was intentional on the part of the builders. The shadow from kerb stone 49, which is two stones to the left of the Seven Suns stone, causes the eclipsing of the symbols on kerb 51. However, it can be seen that kerb 49 leans forward somewhat (K49 is arrowed in the picture on right), and one has to be mindful about the possibility that this lean has happened in more recent times and was not, perhaps, part of the original design.

However, this interaction of light and symbols reminds me somewhat of the illumination of symbols that are not dissimilar to Dowth's seven suns on the back stone of Cairn T at Loughcrew. These symbols are lit up by sunrise on the spring and autumn equinoxes.

The interplay of light and shadow is also suggested at Newgrange, where shadows from the Great Circle stones appear to point towards, or "touch", kerb stones at the front of Newgrange at certain important times of the year, as described by Frank Prendergast.

Although I've been to Dowth several mornings lately to watch how beautifully the sun symbols are illuminated, I hadn't realised the extent of the phenomenon, or the slow progression of the shadow, until I saw the time lapse video. The video was made by taking a photography every two seconds. Because it compresses time, it shows the effect much more vividly.


The shadow crosses the stone diagonally, and interestingly the last sun to remain illuminated is the one which is currently at ground level. I presume the original Neolithic ground level is several inches below the current ground level and that the lower part of this symbol is hidden from view. 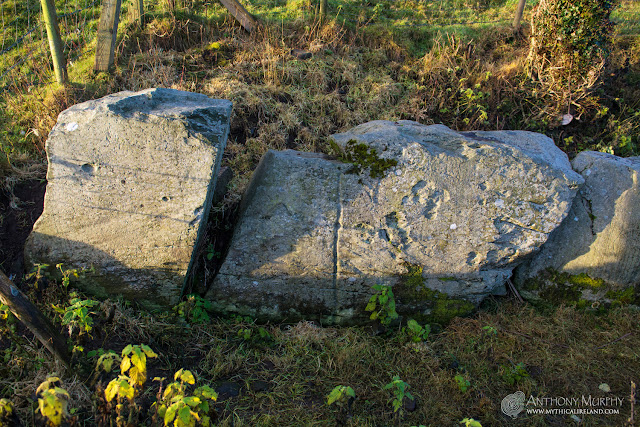 At around 9.15am, as shown in the above photo, the shadow from K49 is crossing the diagonal line on K50. Within about 15 minutes this shadow will have completely crossed K50 and will begin its slow progression across K51, eclipsing the eclipse emblems as it does.


There is undoubtedly more to be learned about Dowth. It continues to provide surprises. Even though its mythology suggests a summer solstice influence, we can see the midwinter sunrise also has a dramatic "wakening" effect upon the few eastern kerb stones that are revealed. This is by far the best time of the year to view the Stone of the Seven Suns. At most other times, the megalithic art appears to be very flat and is sometimes difficult to see.

We shouldn't forget either that Dowth's southern passage and chamber are aligned so that the light of the setting sun on winter solstice shines inside, as shown in these beautiful photos by Anne Marie Moroney.
Posted by Dronehenge at 04:27