"O Men of Dea, let a high mind and high courage rise within you now in the face of the battle"

One of the most famous battles of Irish myth is the Battle of the White Strand (Cath Finntrága/Battle of Ventry), in which Daire Donn, the "High King of the Great World", comes with a massed army assembled under various other kings with the purpose of invading Ireland and putting it under tribute. The story has its known origins in 15th century manuscripts, but there are references to it as early as the 12th century, and, as with many of our ancient stories, its true antiquity is unknown. 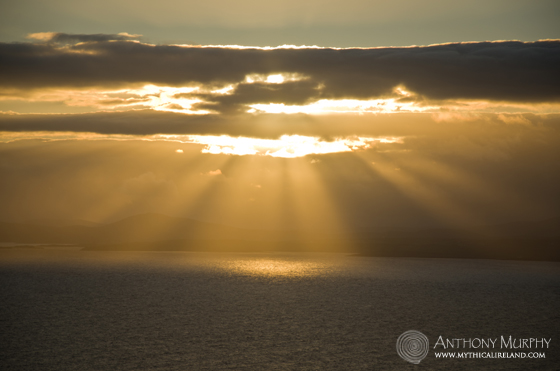 The massed armies have one major obstacle to their ambitions - the warrior hero Fionn Mac Cumhaill and his soliders, the Fianna, who have to defend Ireland against this onslaught. The lengthy text describes a protracted and multifaceted battle between the opposing forces. Folklorists suggest the story's motif - that of an interminable battle, serves as an example of "the everlasting fight".(1)

With the might of the massed forces of the world against them, it might seem that the outcome is predetermined. However, the Fianna make an extraordinary and heroic effort, somehow managing to stem the tide, despite repeated assaults on the shore of Finntraigh by various sorties and a seemingly endless onslaught from the numberless armies of the world.

Principal among the allies of the apparently massively outnumbered Fianna, although they are initially not involved in the battle and at the first petitioning appear uninterested in helping them, are the Tuatha Dé Danann.

Taistellach (whose name means wanderer or traveller) is asked by Conn Crither to go to the house of Bran, and ask him to gather all of the Tuatha Dé Danann to help the Fianna in their mighty battle. Bran goes to Dun Sesnain, where the Dé Dananns are holding a feast.(2)

"There is a greater thing than this for you to do," said Bran; and he tells them the whole story. Sesnan replies, saying that his son Dolb will go to Bodb Dearg in Sidhe Bean Finn above Magh Femen. But Bodb Dearg (who presumably is the chief of the Dé Dananns at this time) is initially reluctant.

"Young man," said Bodb Dearg, "we are in no way bound to help the men of Ireland out of that strait." "Do not say that," said Dolb, "for there is not a king's son or a prince or a leader of the Fianna of Ireland without having a wife or a mother or a foster-mother or a sweetheart of the Tuatha de Danann; and it is good help they have given you every time you were in want of it."


"I give my word," said Bodb Dearg, "it is right to give a good answer to so good a messenger." With that he sent word to the Tuatha de Danaan in every place where they were, and they gathered to him. The army of the Tuatha Dé Danann makes its way to the White Strand, where they are given great welcome by Abarthach:

"O Men of Dea, let a high mind and high courage rise within you now in the face of the battle. For the doings of every one among you will be told till the end of the world; and let you fulfil now the big words you have spoken in the drinking-houses."

"Rise up, Glas, son of Dremen," said Bodb Dearg then, "and tell out to the King of the World that I am come to do battle."

References:
(1) MacKillop, James (1998), Oxford Dictionary of Celtic Mythology, Oxford University Press, p.78.
(2) The retelling of this part of the story is either quoted or paraphrased from Lady Gregory's Gods and Fighting Men.
Posted by Dronehenge at 03:10