Good morning from the Boyne Valley!

I'm delighted to share this beautiful photo of Summer Solstice sunrise at Newgrange/Síd in Broga (taken a few days after the actual day of solstice). 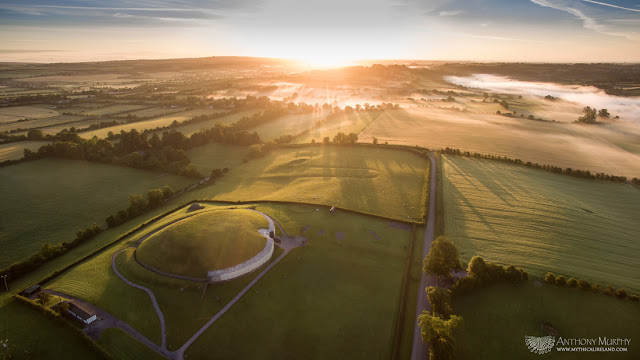 For a moment of the year,
the sun stops its run,
and stays awhile in the
northeast at dawn.
But, like everything in nature
the spiral will wind down once
more towards winter, when the sun
will come home again.

The big crowds that come to Síd in Broga on winter solstice are completely absent for summer solstice. I am glad for that! At 5am it's probably no surprise, but sometimes it's nice to be the only human figure walking among these magnificent remains...
Posted by Dronehenge at 03:08 No comments:

In the story of Tochmarc Étaíne, the Wooing of Étaíne, there is an incredibly powerful image of Elcmar, standing atop Newgrange at Samhain in druidic garb with a fork of white hazel in his hand. Elcmar has arrived into the ownership of Síd in Broga through his power as a druid, and a poet, and a diviner.


And this is the symbol that is all to often missing from the interpretation of Newgrange today. Today, it is called a tomb. It has become a dead thing. The image of Elcmar standing on the mound in all his power reminds us that the creative and intuitive side of our nature must not give way to the deadening image of the archaeologist's measuring rod.

Yes, the archaeological interpretation of Newgrange is hugely important, and we are extremely grateful for all the light that they have shed on these wonderful ancient places. But they do not hold a premium on the interpretation of these sites. In ancient times, the poet held almost equal court in terms of status with the king.

Today, we should allow the druid Elcmar to hold equal standing with the archaeologist. This means accepting that Newgrange has a power beyond what can be measured with a red and white pole. This means empowering aspects of ourselves that are hidden in the darkness of the sídhe, and shining that solstice light into the darkness to awaken something latent in us. We must allow our Elcmar nature to stand on the sídhe at Samhain.

Without that inculcation, that instilling of the wisdom from within, Síd in Broga loses its power, and becomes just the New Grange, that heap of stones that once was a tomb but now is an empty vessel. And the real danger in depriving ourselves of our Elcmar image is that everything thus follows the same path - everything becomes inanimate and materialistic and our view becomes perhaps even nihilistic. Why are we here at all?

Our Elcmar image allows us to stand in the power of our presence, in all that it encompasses - scientific and spiritual, awesome and terrible - and to engage fully with the journey of life. Thus, the childlike initiate becomes the supreme poet of the Boyne, the one who has tasted the Salmon of Knowledge. To the rationalist, the monument is called Newgrange, and it is a pile of stones from the past - the corpse of something it once was. To the poet, the monument is called Síd in Broga, and it is a crystal bower, a place where the sun eternally shines.
Posted by Dronehenge at 01:48 No comments: