Many people look for meaning in the symbols carved in stone at the great monuments of the Boyne. Sometimes the most facile examination (and perhaps the most puerile too!) is to indulge in pareidolia. When I took this image at Knowth/Cnogba today, I was conscious of the image of the Cailleach, having been reading about her quite a lot lately. I will quote the lovely words of the late Patricia Monaghan, whose book 'The Red-Haired Girl From the Bog' I am currently reading:

"Rock is the hag's prime element, her stony spine.... Cailleach time moves form moon to moon, harvest to harvest. It is pagan time, rooted in the eternal return rather than the once-off redemption." 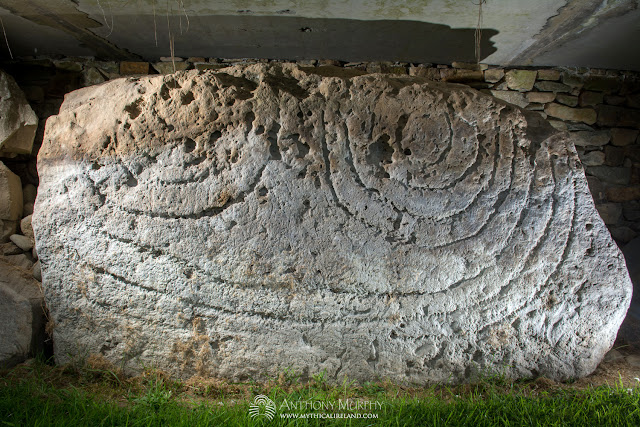 Seeing this stone again – known under the archaeologists’ counting system simply as Kerb 22 – I was struck at how much it seemed to look like a big smiling face with two bulbous eyes and a big, broad grin.

These rocks were already eternally old when they were hauled into place - all 127 of them - to create a giant kerb or belt of stones around the gigantic mound that we know as Knowth. And now the carvings that were carefully etched into the surface of these slabs are eternally old, and the rocks that bear them speak of the beginning of time.

Once upon a time, so the story goes, this great mound of stone and earth was known as Cnoc Búa or Cnoc Buí, the hill of the daughter of "red-haired Rúadrí", wife of Lug, son of Cian, of the ruddy spears.

"It is there [Cnogba] her body was buried; over her was built a great hill."

What shall we say about Buí today, except that she is remembered still, in these many aeons since her image was first conceived in stone, at the mighty Brug na Bóinde where the hag never dies. The hag's breasts are imagined as mounds in the Boyne landscape; her passage-wombs, creaking and groaning under the weight of the ages, live on to tell the story of the undying sons who were born there – Oengus the young, who was conceived and born in the same day; and Sétanta, whose crossing of the threshold of initiation brought him from innocent boy to murderous warrior. In there, Elcmar the magician of Brug na Bóinde, divined souls with his fork of white hazel; Dagda Mór, the Eochaidh All-Father, offered satiation to those who were crossing over; Oengus protected the beautiful Etaín from the jealous Fuamnach in his sunny, crystal bower.

At ancient Cnogba, it is said that Englec the daughter of Elcmar was stolen away by Midir, much to the heartache of her lover, Oengus Óg. At Newgrange, Oengus had protected Midir’s lover Etáin, and yet at Knowth the two were love rivals for the woman Englec, whose disappearance was mourned greatly by the inconsolable Oengus. Mourning the abduction of his beloved, Oengus engaged in a curious ritual … casting the “blood-red nuts of the forest” on to the ground, and performed “a lament around the little hill”.


And so, in the confusion of tales so typical of the lore of the olden days, Knowth commemorates two distinct but perhaps not mutually exclusive events – both involving the passing (so to speak) of great women (goddesses even). As Cnoc Buí, Knowth remembers the great woman who was set to rest there beneath its heaving bulk, the undying hag of the ancient world who had many names and guises. As Chnó-guba (the “nut-lament”), Knowth commemorates the passing of Englec into another realm, swept away by Midir to the Síd of Fer Femin, never to be seen by Oengus again.

Today, I stopped in front of stone 22 at Knowth during my round of the kerb (deiseal, sunwise, this time),  and, having to stall a while under the modern concrete ledge to shelter from a summer shower, I imagined for a time that I was seeing the great women of Cnogba, the abiding visage of the ancient hag that was known here as Buí, and the darling Englec, the beautiful daughter of Elcmar. And I wonder which would endure longer – the memory of these great mythic women, or the stone carvings bearing this image.
Posted by Dronehenge at 14:07