The lunar symbolism of kerb stone 78 at Knowth

This is kerb stone 78 at Knowth, located not far from the entrance to the western passage. It is one of 127 kerb stones at Knowth, of which 90 have megalithic art. But what do these symbols represent, if anything? Are they merely art for art’s sake?

American artist Martin Brennan published a book called The Stars and the Stones in 1984, having studied and drawn the megalithic art on almost all of the known decorated prehistoric stone sites in Ireland. Brennan’s overall supposition was that the ancient engravings at Neolithic sites such as Newgrange, Knowth, Loughcrew, and many others, were related to astronomy. His book was later republished as The Stones of Time.

The main plank of Brennan’s hypothesis was that the megalithic mounds and art are “interconnected, sophisticated calendar devices”. The summary on the back cover of the book says:

At critical times of the year, the rising or setting sun projects beams of light into the inner chambers of the mounds, illuminating specific images carved on the stones. Those images – seemingly abstract wheels, spirals, and wavy lines – suggest provocative new insights into their makers’ understanding of celestial cycles and the importance of those cycles in human affairs.

Brennan’s interpretation of kerb stone 78 (which he labelled as stone NW4 in his own personally devised numbering convention) is that it contains a diagrammatic representation of the moon through the use of what he calls “bijections or one-to-one correspondences with the phases of the moon”. 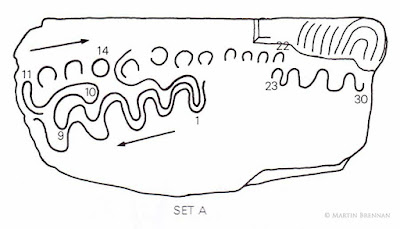 Brennan suggests that lunar imagery predominates on the kerb stones on the western portion of the great kerb of Knowth, where the crescents and arcs that dominate the imagery were generated by an interest in the moon and the division of time long before the age of mechanical clocks.

The crescents, waved lines and circles on Kerb 78 represent the phases of the moon, according to Brennan.

A ribbon-like development of the wavy line extends from the central image. The line follows a sequence shaped to fit the lunar month. The wavy line is transformed into crescents and then a full circle or full moon on the fourteenth count. A line divides the rest of the month, towards the end of which the crescents revert to the wavy line at the last quarter, defining a month of 30 days.


He proposed a second way of ordering the month using a different interpretation of the symbols. The top line counts from the first day of the moon as far as the seventeenth day, which is the day upon which the moon begins to wane. The sequence continues at the bottom of the stone, as far as day 27 and the last visible crescent. A final three-count wave represents the three invisible days of the moon.

The number 17 is often treated with special significance in connection with the moon, he says. "It may have had significance in a calendar of ritual. Usually it is the seventeenth phase of the moon which appears on the horizon and projects a beam of light into the mounds."

Brennan’s work is not without its detractors, and the analysis and categorisation of megalithic art has been an area of debate and dispute. Some scholars argue that the megalithic art is abstract and non-representative. Brennan, however, develops a comprehensive thesis around the astronomical symbolism and, coupled with his team’s important discoveries at Loughcrew and Dowth*, it all makes for a fascinating interpretation.


* Brennan, along with Jack Roberts and others, discovered that the southern passage at Dowth is aligned so that light from the setting sun on winter solstice reaches the stones at the rear of its circular chamber. They also discovered that Cairn T at Loughcrew is aligned so that a stone with solar emblems at the rear of its chamber is bathed with sunlight at dawn on the vernal and autumnal equinoxes.

Knowth's Calendar Stone
The 19-year Metonic Cycle of the moon

Posted by Dronehenge at 09:19 No comments: